I’ve mentioned it before, but it bears repeating: this offseason, I am writing a recurring column with the pleasingly alliterative name of “Ben’s Bookshelf.” Each column features a review of a Minor League Baseball-themed book, and there have been two thus far: the first took a look at Dave Rosenfield’s Baseball…One Helluva Life and the second ventured a gander at Katya Cengel’s Bluegrass Baseball. 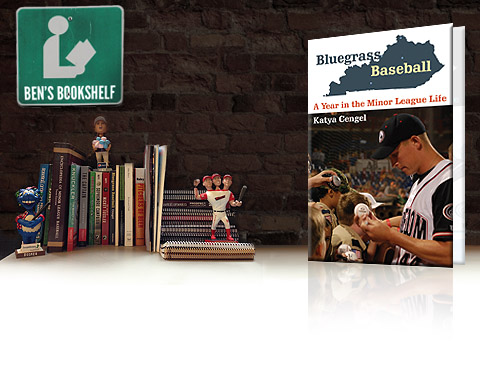 The book can see its reflection

Thus far the response to the column has been robust — at least when it comes to the number of authors seeking to have their books reviewed. I’ve received seven submissions in less than a month (and more are welcome), so clearly this is something that has legs. Or at least a spine.

But anyway! This is where you come in: I’d like to beef up Ben’s Bookshelf by including reader-submitted reviews of favorite (or perhaps not-so-favorite) Minor League tomes. These reviews should be short (no more than 300 words), but beyond that there are no real restrictions so long as the book in question has some sort of Minor League Baseball angle. Interested in having YOUR review featured in an upcoming column? Then simply send me an email: benjamin.hill@mlb.com and we’ll discuss your proposal in a genteel yet not needlessly loquacious manner.

And, along those lines, I’ll be soliciting ultra-concise Twitter reviews as well, so follow @bensbiz and keep your eyes peeled for literary-minded missives of the utmost brevity.

Okay! With that bit of business out of the way, I’d like to briefly and belatedly follow-up on one of this past summer’s most interesting promotional endeavors. As you may recall, the Fresno Grizzlies held a season-long raffle for a most intriguing piece of baseball history: a pack of 1909-11 Piedmont Cigarettes, which could possibly include the ultra-rare and incredibly expensive Honus Wagner T-206 card.

The winner, announced on September 3 (the last home game of the season), was one David Tyckoson. So, what did Mr. Tyckoson decide to do with his prize?

“I’m not going to open it immediately, if ever,” said Tyckoson, in a press release put out by the Grizzlies. “One of the things I love about the sport of baseball is the history behind it and this is a part of that history. To connect back to something from that history is really cool.”

So, the mystery of what’s in the box shall remain just that: a box. Or, I mean, a mystery. What would YOU have done?