This season, when I’m on the road, I’ll be writing a short, on-the-spot blog post about each Minor League ballpark that I visit. Then, upon my possibly  triumphant return home, I will provide the exhilarating blog coverage that you have come to know and, perhaps, even love. So let’s get to it!

April 15, 2015 — Holman Stadium, located within the historic Dodgertown complex (Spring Training home of the Brooklyn/Los Angeles Dodgers from 1948 through 2008).

Event: Jackie Robinson Game, between the Brevard County Manatees and St. Lucie Mets. Robinson trained at Dodgertown throughout the bulk of his career, and even hit the first home run at Holman Stadium.

Holman Stadium, from the outside:

Holman Stadium, from within: Some 6,000 people were in attendance, a huge crowd by Florida State League standards, no matter what the context.

Culinary Delight: I skipped my usual food coverage, given that this was a one-time event. But here’s a shot of one of the main food and beverage areas. You can imagine how cramped this became once some 6,000 people were in the ballpark.

Waiting for the Punch-Vine (my nightly attempt at telling an “original” ballpark joke in six seconds):

My jokes have become so groundbreaking and subversive that at this point they’re not even jokes. https://t.co/87tR2o8PFi

At Random: Old signage is the best kind of signage.

In Conclusion: Thanks, Jackie.

One of my recent posts included a write-up on the Omaha Storm Chasers inherently ridiculous “Managerial Cell Phone Night.” Today, as a chaser to that shot of absurdity, I have a recap of Omaha’s April 15 Jackie Robinson Day promotion. Jackie’s legacy is celebrated throughout MLB every year, as you well know, but in the Minors it’s a bit more scattershot. It’s great to see teams like the Storm Chasers go above and beyond, setting a template for others to follow.

I’m now going to turn the floor over to Omaha promotions director Ben Hemmen, who provided the words and pictures you’ll soon see below. 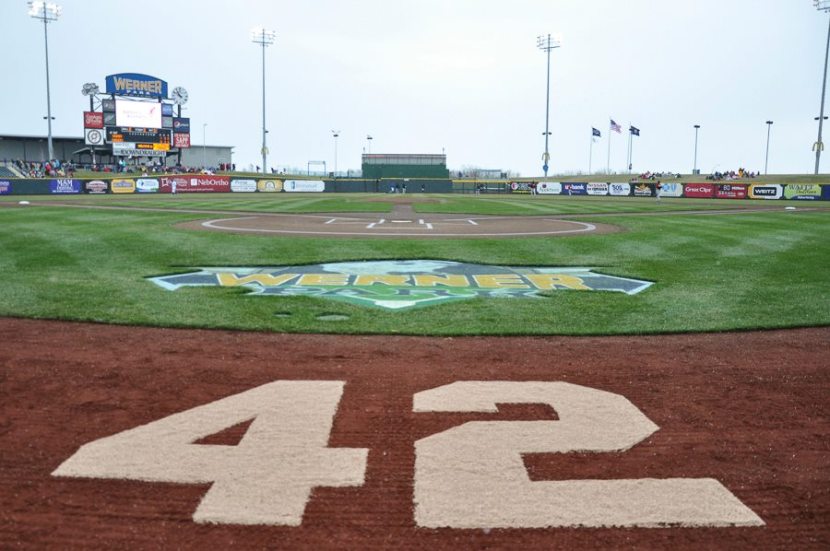 The Omaha Storm Chasers, as part of the celebration on April 15th for Jackie Robinson Day, honored the baseball legend who broke the color barrier in 1947 by wearing specialty Omaha “42” jerseys and officially retiring the number 42 at Werner Park.

The Storm Chasers recognized our annual “Chasers-Robinson Scholarship” winners as well as 42 local educators, and invited more than 4,200 school children from North and South Omaha to All About Kids Day presented by the Home Run Foundation of Greater Omaha.

Sharon Robinson pre-recorded a “Welcome” message that was played during the game, thanking the Storm Chasers for wearing the specialty #42 jerseys and describing to the children the legacy that her father left behind for them to follow. Also during the game, educational facts about Jackie Robinson were displayed on the videoboard to focus on his importance to both the game of baseball and society to all of the kids in attendance.

Finally, all of the game worn, player autographed #42 jerseys were put up for both silent and online auction. All proceeds from those auctions ($3,690) were donated to our Home Run Foundation of Greater Omaha. The Home Run Foundation of Greater Omaha runs our Chasers FUNdamentals program which teaches intercity and underprivileged youth the game of baseball.

Meanwhile! It’s Tuesday, meaning that a new Promo Preview column is out on MiLB.com. Included therein was this:

The Senators play on Harrisburg’s City Island, surrounded on all sides by the Susquehanna River. This aquatic environment is a haven for pesky mayflies, which have long enlivened the ballpark atmosphere by electrocuting themselves en masse in the stadium lights and then raining down onto the fans below. Instances of insect corpse bombardment have greatly decreased since a roof was added to the grandstand of the stadium prior to 2010, but nonetheless the Senators want to make sure that their fans are prepared. The first 1,000 fans attending Saturday’s ballgame receive an umbrella emblazoned with the team’s alternate “Mayfly” logo, because if you’re going to get rained on by dead bugs, then you might as well have a sense of humor about it.

Perhaps it’s a bit anti-climactic, but since this is the first insect corpse deterrent giveaway item I’ve ever heard of I feel obligated to include a picture. 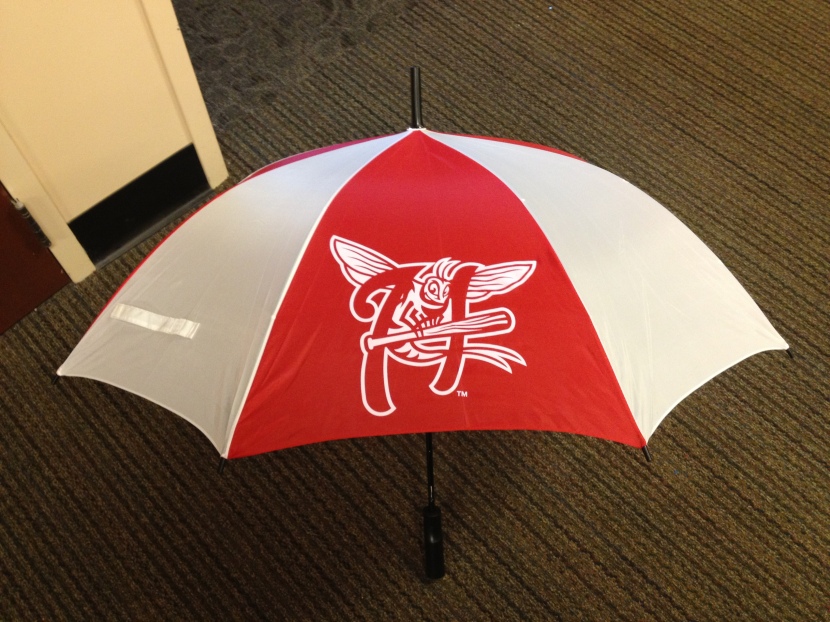