The last couple of weeks were slower than a sloth on a treadmill, but boy oh boy have times changed.

All of a sudden it feels like the season again, with news and notes coming in from left and right and everywhere in between. It’s time to start posting, because the content levels are rising and soon I might drown — alone and forgotten in a remote corner of MiLB.com HQ.

To the Bullet Points!

— The New York-Penn League may not start play for another three months, but that didn’t stop the Brooklyn Cyclones from releasing a picture of their Angel Pagan bobblehead. I’m glad that they took his first name literally as opposed to the surname, because a bobblehead depicting the ballplayer as a hedonistic polytheist probably wouldn’t go over too well. 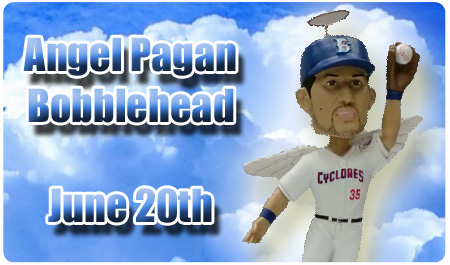 — Meanwhile, Brooklyn’s NYPL rivals the Lowell Spinners announced the follow-up to last year’s celebration of Bubblewrap.The team will stage a “Flossing World Record Attempt” on June 29, a promotion recommended by four out of five dentists. My extensive research into this most crucial of topics revealed that previous attempts have involved a huge single strand of custom-made floss.

I’m not sure if this will be the case in Lowell, but either way I recommend that this product serve as the official sponsor.

— In other follow-up news, the Lake County Captains are continuing with the Christmas Story themed giveaways that started with last season’s “Skipper Leg Lamp.” On July 23, fans will receive a bobble doll in which Skipper’s nose is stuck to a foul pole. I haven’t obtained a picture yet, but this item is of course a reference to this:

— Another club to recently unveil their 2011 promo scheduleare the newly-rechristened Omaha Storm Chasers. While other teams honor Jimmy Buffet, the Storm Chasers instead pay homage to Warren. The Omaha billionaire and member of the team’s ownership group gets his own road jersey replica giveaway, taking place April 30. Here’s a pic of this Warren piece of memorabilia: 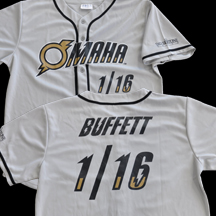 — Another notable jersey hailing from the preeminent Midwest is that which the Wisconsin Timber Rattlers will be wearing during Sunday home games. This one is like an undersized fish — total throwback. 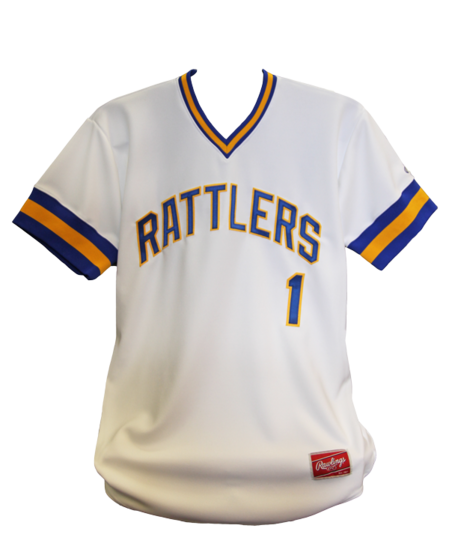 — In keeping with the jerseys theme, the Charleston RiverDogs will be giving away Roberto Alomar Charleston Rainbow jerseys on July 23. The newly-minted Hall of Famer suited up for the Rainbows in his first professional season, and while I have yet to obtain photographic evidence here’s my best approximation of what it will look like:

But no matter what it looks like, this is sure to be one of the best ROYGBIV-aways of the year!If there’s a support group for those with an over-reliance on puns and wordplay in general, then I should probably join it. I’m not even joking, it’s become an obsession and I don’t think it’s healthy.