When I was in Lancaster earlier this month, JetHawks food and beverage director Adam Fillenworth told me that the team was on the cusp of debuting “the smallest hamburger in Minor League Baseball. Such an item would be a tongue-in-cheek rebuttal to the “extreme” concessions that have overtaken the Minor League landscape in recent years, a trend that the JetHawks themselves have participated in (see Burger, Stealth).

My reportage, always free from conjecture and hearsay, was once again accurate. For the team has now unveiled their miniature creation: “The Itty-Bitty Burger.”

The tiny hamburgers in deep fried buns are only available for a limited time. They can be upgraded to a “cheeseburger” (the addition of nacho cheese dipping sauce) and can be served with complimentary sides of ketchup, mustard and relish.

“It seemed like everyone was attempting to out-do each other this year by creating food that didn’t look appealing, so we thought we’d go in a different direction,” JetHawks Food and Beverage Director Adam Fillenworth said.

This development is analogous to the rise of punk rock, a no-frills genre formed in opposition to the over-produced pomposity of ’70s arena rock bands.

A particularly adept Me Decade arena-filler was Bad Company, whose hit “Feel Like Bacon Love” was certainly heard at Richmond’s The Diamond on Wednesday. As you’ll recall, the Flying Squirrels staged a “Tribute to Bacon” featuring an appearance by a local detective with the name of Kevin Bacon.

A robust crowd of over 5500 fans took in the action on this raucous evening. Some images and explanations:

Sticking with the Cal League north, let’s head over to Visalia to check out this year’s Helicopter Candy Drop. The name of the promo is truth in advertising: candy is dropped on to the field by a helicopter, and then the children in attendance go on a mad scramble.

But that’s not all that’s been going on in Visalia. The day before the Helicopter drop the Rawhide held a “Belle of the Ballpark Grandma Beauty Pageant.” Broadcasting director Donny Baarns writes that:

The contestants each demonstrated a talent during different half-innings; Doris, the eventual winner, led the crowd in a Rawhide cheer (“Next week I will be 96,” she said, “And I can’t believe I finally made the cheerleading team!”) Another played keyboard and sang “Take Me Out to the Ballgame.” The contestants also participated in a “White T-Shirt Contest,” where each was given a basic white Rawhide t-shirt and allowed to decorate it creatively in their own style. The contestants came from local retirement homes, where preliminary rounds where held. 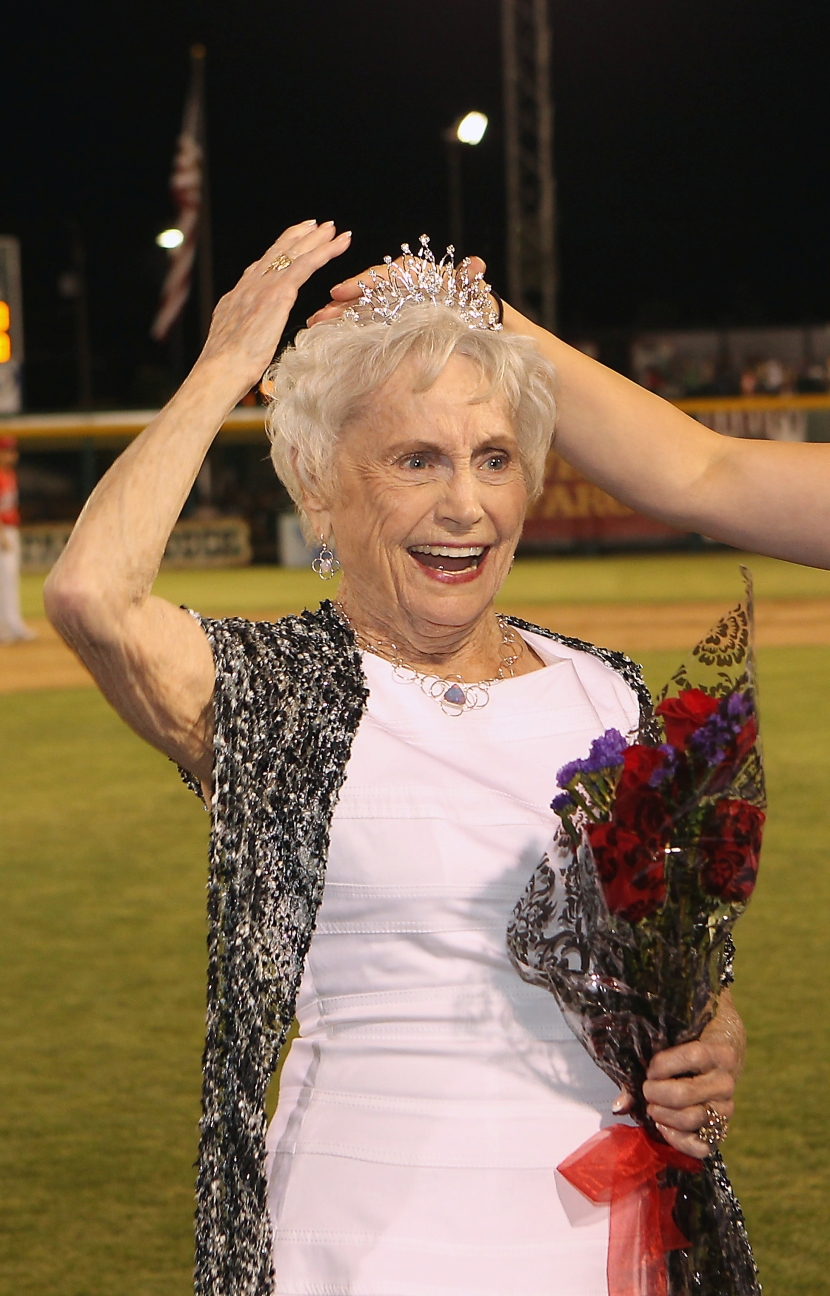 I can’t think of a better image to end the blogging week. Thanks, as always, for reading. And more importantly, get in touch! It can be a difficult thing, this writing game, and your feedback and support is very much appreciated.

Well hello everybody and how ya been? It’s Ben’s Biz typing on the keyboard again. I’ve got grace, class, style, finesse and debonair. Writing ’bout MiLB promos and hopin’ folks care.

The point of the above Beastie Boy lyric approximation is simply to say that it’s been a while since I was able to kick out a good old-fashioned blog bouillabaisse (and I spelled “bouillabaisse” correctly on the second try, a new record).  I’ve still got some odds and ends from my left coast road trip to share, but today will be all about the here and now in addition to what was recently the here and now but is now then.

For starters, TONIGHT is the Richmond Flying Squirrels’ “Tribute to Bacon” featuring an appearance by Kevin Bacon!

This particular Kevin Bacon has never been immortalized in celluloid, however.

So that would be just one degree of Kevin Bacon? Perhaps he’ll obtain a Masters one day. Another Flying Squirrels item of note is that this picture of a “superhero Mom” catching a fly ball went viral.

Name a media outlet, and chances are they ran something on this. For background on how it all came to be, check out this Richmond Times-Dispatch story.

The following photos didn’t go viral, but they were sent along to me by the Toledo Mud Hens and are well worth a look. The ol’ “gum on the hat” trick is never not funny. This time around the victim is Michael Restovich of the visiting Charlotte Knights. 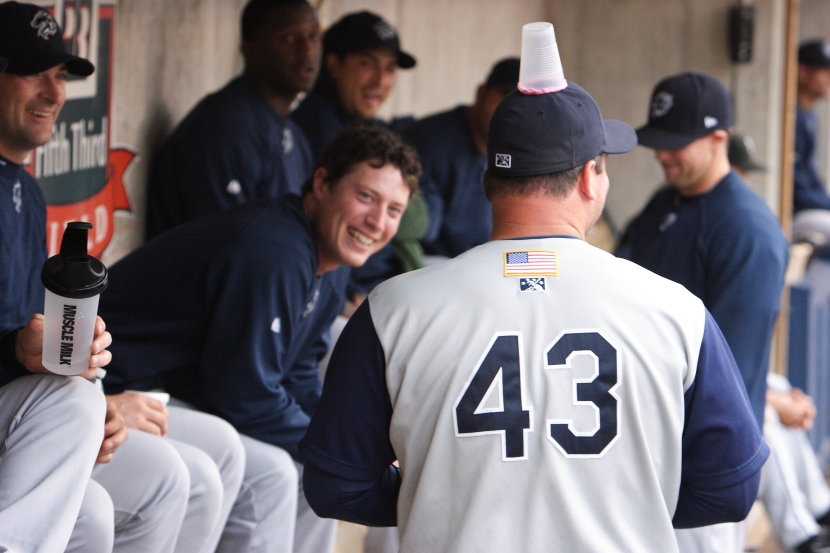 Another perennial source of Minor League humor comes in the form of mustaches. One of the most prominent facial follicle initiatives currently taking place is the Delmarva Shorebirds’ “Mustache May.” Members of the team and front office are participating, and fans can donate money toward their favorite.

The current leader is none other than trainer Will Lawhorn.

Not at all creepy

You’ve got to have good self-esteem to grow a mustache like that, which is something that Hickory Crawdads mascot Conrad is currently lacking. 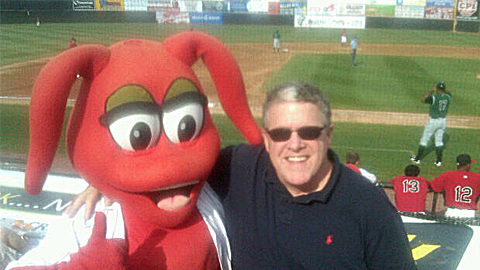 HICKORY, NC –In response to SI.com writer Peter King’s column on Mon., May 16, in which Conrad the Crawdad’s self-esteem was questioned, the Hickory Crawdads are introducing a brand-new promotion and ticket deal for the rest of the 2011 season – Conrad’s Self-Esteem Wednesdays!

For every Wednesday home game…fans can receive a discounted $4 box seat ticket just by mentioning “Conrad’s self-esteem” at the Ticket Office.

The Crawdads will then donate $2 from every $4 ticket to Catawba Valley Behavioral Healthcare in support of their ongoing mission to provide behavioral health and support services for those in need in the Unifour community.

I’m sure Conrad will rally from the depths of his despair, something that Akron Aeros fans have become quite adept at doing.

And since I always like to end on a high note, how ’bout these Cedar Rapids troubadours?

Contact me with any kernels of info you may have to disseminate. I’ll be here waiting.