Today marked the penultimate game on the 2010 Minor League Baseball schedule, but I’m not about to let the imminent cessation of play cramp my style.

No, I’m going to keep on rolling — all the way to the banks of the Mississippi River. All the way to Modern Woodmen Park, home of the Quad Cities River Bandits. 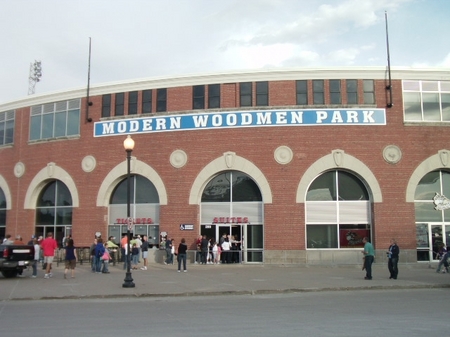 Modern Woodmen Park, formerly known as John O’Donnell Stadium, was built in 1931. But thanks to extensive renovations and a proactive ownership group it has aged gracefully — think Helen Mirren as opposed to Joan Rivers.

But the stadium is located right next to one of the mightiest rivers of them all, the mighty Mississippi. The Centennial Bridge, which connects Davenport (Iowa) with Rock City (Illinois), serves as one of the best backdrops in all of Minor League Baseball.

The bridge, from the outside of the stadium. 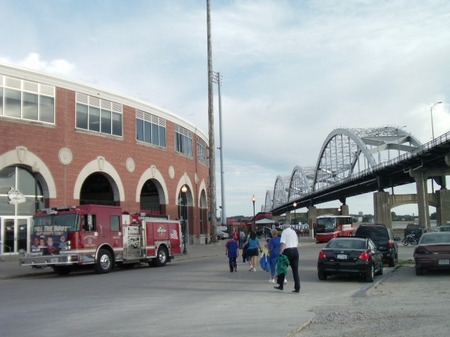 While, to the left, one can see Davenport’s Wells-Fargo Building.

Wells-Fargo is all well and good, but that was as far as I was willing to go in that direction. River banks are far more appealing than those concerned with matters fiduciary.

And once inside, I soon set my gaze upon the Centennial.

The above pic came out well, but in all honesty I didn’t have my “A” game tonight when it came to photography and the ability to craft the evening’s events into a coherent narrative (perhaps I did a better job in this MiLB.com story, which contains info not contained here).

My spirit remains indefatigable, however, so I’ll gamely “press” on:

As the above photo illustrates, the River Bandits logo is incorporated into nearly every aspect of the stadium signage. The suites, concession areas, restrooms (“Bandits” and “Banditas”), and even the janitor’s closet are all adorned with the silhouette of a partially-obscured raccoon.

The aggressive re-branding effort is courtesy of Main Street Baseball, who took over ownership of the River Bandits after the 2007 season. Led by Main Street president Dave Heller and River Bandits GM Kirk Goodman, they team has spruced up the ballpark experience in a variety of ways.

For starters, a gravel pit next to the the third base bleachers was converted into an honest-to-goodness cornfield.

The above photo was taken just before the starting line-ups. When the players are announced, they emerge from the cornfield and take their position.

During the game, the corn field serves as the home bullpen backdrop.

And see the seemingly random streaks of yellow on the bleachers to the left? When that section is empty, the words “Let’s Play Ball” can be seen by passing motorists on the Centennial Bridge.

This huge billboard, located behind the videoboard, is also for the benefit of bridge-crossing automobilians.

Of far more interest to an individual actually in the stadium is the “Tiki Village” located in right field, a tropical-themed drinking establishment.

Much better pics of the Tiki Village can be found in this blog post, including this classic shot of two gentleman on the “Tiki Bed”.

The mattress has since been removed, however, so the bed is now more akin to a standard-issue gazebo.

Walking from right field toward left, the Tiki Village gives way to a recently-installed nine-foot berm that doubles as protection against a flooding Mississippi River.

Every Sunday is “Bark in the Park” at Modern Woodmen, so canines were a common sight. 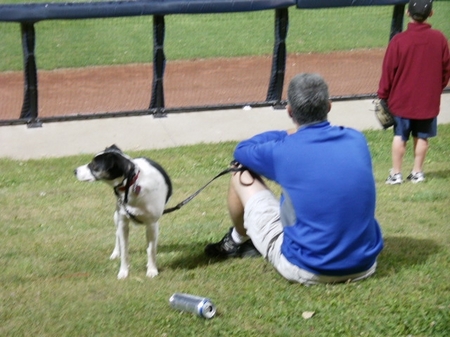 The area also includes what Goodman called “Memorial Row”. This plaque commemorates Dorothy Wulf, a John O’ Donnell Stadium regular who was named Quad Cities’ “Fan of the Century” in 2000. 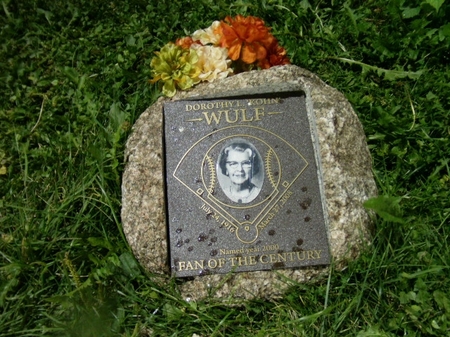 Wulf’s plaque is located next to a glass-encased boulder, signed by veterans who took part in the “Wounded Warrior” program across the river at Rock Island Arsenal.

Behind the berm area, one could see munitions experts of a different sort. These guys were in charge of the evening’s post-game fireworks. 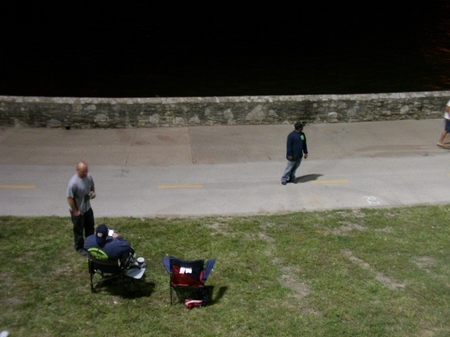 They were going to have to wait. Quite unexpectedly, the stadium was hit by heavy rainfall. 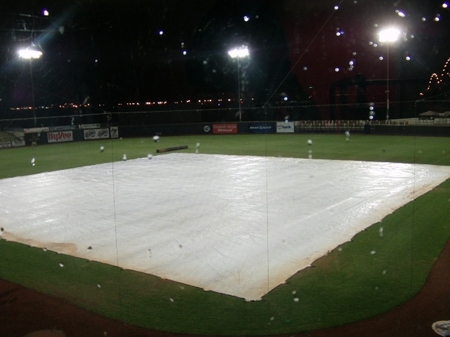 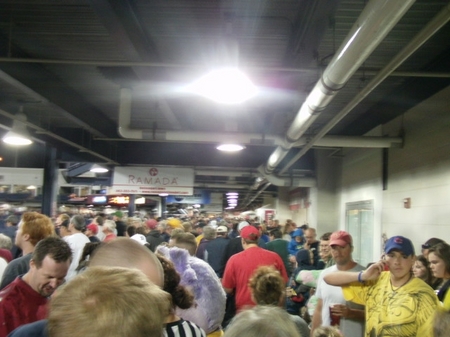 Although business remained slow at the Moline Market (the concourse concession stands are each named after one of the Quad Cities, others include the Bettendorf Bakery, Davenport Diner, and Rock Island Grill). 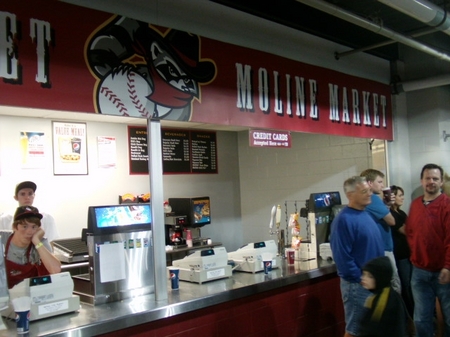 Some took refuge in the team store, others in the Mediacom Lounge: 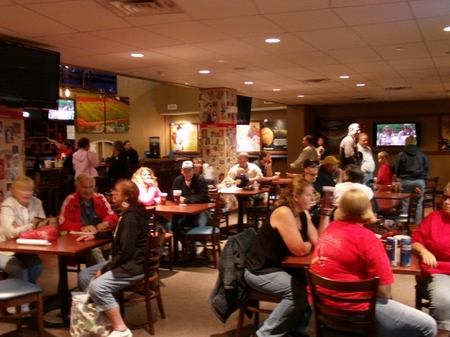 While packed earlier in the game (with German dignitaries from Davenport’s sister city!), the surprisingly spacious events area was now deserted. 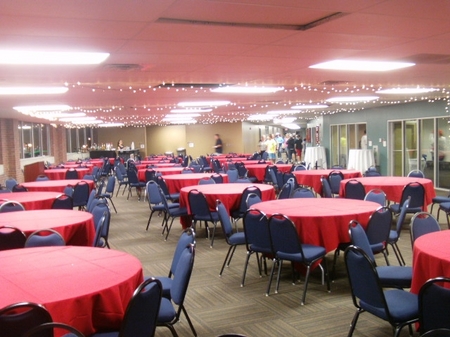 Maybe the visiting Germans and the local politicians and business leaders entertaining them were hip to the fact that action was about to resume.

For resume it did. 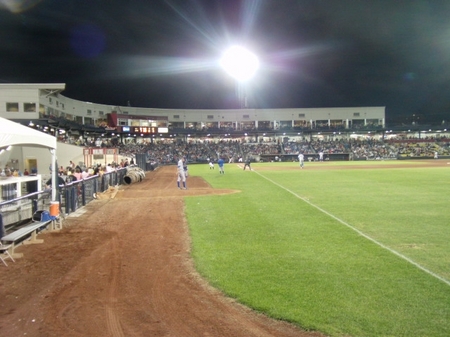 Despite the delay, the game still ended before 10, with the River Bandits eking out a 1-0 win.

And then came the fireworks, as promised. I am never able to capture satisfactory firework photos, however, so this portion of the evening will be left up to the imagination.

I’m still going to bed. Goodnight from Room 144 of the Clarion Inn.