Things have been slow on the news front this week, leading to irrational fears that I’ll never have anything interesting to write about ever again.  But, as usual, I have been amply provided for in my time of need.

The West Michigan Whitecaps have released their 10 finalists for 2010’s marquee new concession item, and it does not disappoint. As you may know, the team has a reputation to uphold in the category of “attention-getting concessions.” 2009’s big (and I mean that literally) addition was the Fifth Third Burger, a monstrous concoction that ended up becoming a multi-galaxial phenomenon.

Over the last three weeks, the Whitecaps have been soliciting concession suggestions from fans. The following list represents what they felt was the “best”, which in this case is even more subjective than usual. Behold:

1. Chicken and Waffles – Why did the chicken cross the road? To lie down on a bed of waffles, get smothered in gravy and get eaten by you, of course!

2. Chili Mac Tacos – Think comfort food that took a trip to
Mexico. Creamy mac and cheese is smothered in chili then loaded into a
hard taco shell to create a taste experience that won’t soon be
forgotten.

4. Corn Dog o’ Plenty – If the Idaho Christmas Tree isn’t enough
corndog for you then try the Corn Dog o’ Plenty. A full half-pound,
footlong frank that is battered and deep fried to make one gigantic
corn dog.

5. Cudighi Yooper Sandwich – If you don’t know what this one is
then you haven’t been to the Upper Peninsula. Cudighi is a spicy
sausage found throughout the U.P. and we might bring it down to West
Michigan. A sausage patty, smothered in cheese, pizza sauce, peppers
and onions could grace the concession stands of Fifth Third Ballpark.

6. Declaration of Indigestion – When in the course of human
events it becomes necessary for one people to disband from the tyranny
of healthy eating, they should consume the Declaration of Indigestion.
You see, all sandwiches are not created equal as this half-pound,
footlong hot dog is covered in a philly cheese steak (steak, cheese,
peppers and onions) and served on a gigantic sub roll. It is certainly
your unalienable right to consume one of these in the pursuit of
happiness.

7. Idaho Christmas Tree – Why waste your time eating all of your
favorite items separately? This is a batter-dipped hot dog rolled in
french fries and deep fried to create the perfect limbed link on stick.

8. Poutin – A real treat from North of the border. The French
Canadians have done it again, and this time with gravy. Fries, fried
cheese curds and gravy make up this delectable side dish. Tres bien!

9. The Pink Panther – Not sure if this guy is named after the
famous detective or the insulation, but either way it’s delicious. Take
a hot dog bun, slather it in icing and fill it with pink cotton candy.
Maybe drizzle some root beer syrup over the top for good measure. It’s
the dessert dog you’ll have to try this summer!

10. Twinkie Cheese Dog – This dog can survive any disaster and
it might cause a few of its own. Simple – a hot dog laid in a Twinkie
covered in cheese. Yum.

Twinkie Cheese Dog? Now where have we seen that before? I wonder…

Voting runs through February 23, so be sure to make your voice heard. And while it’s still very 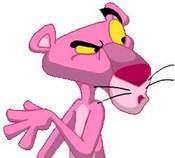 early in the process, I couldn’t help but find some solace in the fact that as of this writing the “Pink Panther” had not received a single vote. I mean, seriously, that thing is gross.

But a deep-fried combination of hot dogs and french fries? That’s pure brilliance, and if executed properly it will be an advancement in American society on par with the polio vaccine.