Times are tight these days, and we could all use a little extra cash. But acquiring extra cash usually requires extra work, and that’s no fun at all. Why not just head to your local Minor League stadium in order to obtain the riches you so desire? This is a much better path to potential financial salvation.

“The Captains will give away $1,000 in cash and prizes at every Wednesday night
home game

Starting Wednesday, June 25th, the first
1,000 fans through the turnstiles will receive an envelope containing anything
from a dime to a certificate for $500 cash.”

(Thanks to Lake County Promotions Manager Jonathan Levey for the info).

A similar promotion is being staged by the Connecticut Defenders on Friday, July 11th. Defenders Director of Sales Johnny Gill writes:

And speaking of the aforementioned Johnny Gill, I received an email earlier this afternoon touting the fact that he recently worked his 300th consecutive game as the Defenders’ on-field MC. This email was signed “Proud Staff”, despite the fact that it came from Gill’s email account.

I would like to encourage this practice in the future. If any Minor League front office members would like to tout their accomplishments while half-heartedly pretending to be someone else, then don’t hesitate to get in touch.

Any person with a proactive and positive disposition will tell you “When life gives you lemons, make lemonade.”

This theoretical individual would be trafficking in a well-worn cliche by telling you this, but so what? Cliches become cliches because they often convey universal truths in an easy to remember manner.

And very few entities are as good at “making lemonade” as Minor League Baseball clubs, who are always on the lookout for ways to turn negative situations into positives. A recent example of this is the glut of teams who have crafted promotions that are tied into the exorbitant price of gasoline.

One of the latest to do so are the always innovative Fort Myers Miracle, who have once again gone the proverbial “extra mile” with this promotional endeavor.

The basic gist of the Miracle’s “Cheaper By the Gallon” promotion is that, every Monday, the 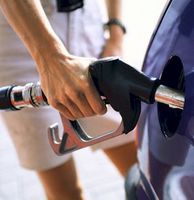 lowest price for a gallon of unleaded gasoline offered in South Fort
Myers will equal the cost of a box seat ticket for that night’s game.

But it just keeps going from there. Paragraph six of the press release states:

“The Miracle’s goal to “fuel up” the local economy will also include
gallon giveaways. Fans will have the chance to win anything from a
gallon of water to a gallon of sour cream. Anything that comes in a
gallon is fair game for a “Cheaper by the Gallon” Monday giveaway.”

“Monday patrons will also benefit with a discount on popular items from
the grill — hamburgers, cheeseburgers, bratwursts and chicken
sandwiches. The same price for a gallon of gasoline is the same reduced
price for these ballpark favorites.”

“Since there are four quarts in a gallon, if there are four people in
your vehicle when you arrive at Hammond Stadium, your parking is free
on Monday nights.”

“Every fan who attends a Monday night game will be entered into a
drawing to receive a pass for free gas, courtesy of the Miracle.”

So, there you go. Round up three friends and head over to Fort Myers’ Hammond Stadium on Monday. The ticket will be cheap, parking will be free, and by the end of the evening you might be the proud owner of a gallon of sour cream. What more do you need?

Lemonade has been served.

Those of you who regularly peruse the content on MiLB.com will recall that the Charleston RiverDogs were featured in last week’s “At Home With…” team profile column.

In said column, Assistant Director of Media Relations Danny Reed explained how the team’s operating principle is “Fun Is Good.” That’s not just some meaningless slogan — the RiverDogs really believe in this concept. For instance, check out the specifics of the club’s upcoming “Fun is Good” charity golf tournament:

“Beginning with a 1 pm shotgun start, the four-man Captain’s Choice
format will feature the traditional RiverDogs twist for nine holes with
“Fun Is Good” being the theme and the other nine holes will adhere to
the “serious and competitive” side of golf.

During the RiverDogs’ “Fun Is Good” nine holes, there will be
opportunities like placing the golf ball in a sling shot on the tee box
to serve as a drive, using a bat as a putter, dressing in drag and
hitting at kegs in the fairway to win free beer.

Prizes will be provided for first, second and third places, and in
typical RiverDogs fashion, there will be prizes (like a goldfish, a
block of ice, a can of spam or a watermelon) for last place.”

As someone who has always dreamed of being rewarded with a watermelon in recognition of my cross-dressing golfing abilites, this tournament speaks to me on a very deep level. Read more about it here, and while you’re on the RiverDogs website, be sure to check out this blow-by-blow account on the day in the life of a Minor League general manager.