It is happening again.

This time around, the “again” that is “happening” are two staples of the Minor League Baseball winter time news cycle: Valentine’s Day mascot delivery and snow-covered field photos.

My days of exhaustively documenting all mascot delivery offers throughout the Minors have long since passed, as I need to maintain a facade of professional growth and momentum. Nonetheless, it remains my duty to note some of the more intriguing developments in the field. For instance, the Lehigh Valley IronPigs remain the only team that offers “Pork-o-Grams” to their fan base. 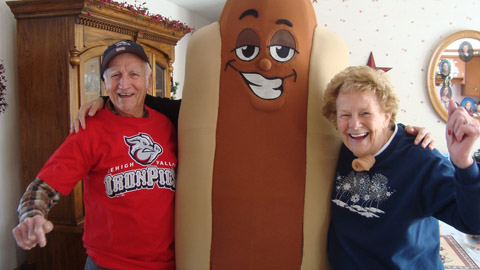 Two Pork-O-Grams packages are offered, but I would opt for “Package B” as it includes both a dozen roses and a pair of pig noses. Also, I can’t help but wonder if Diggity (pictured above) is related to the self-cannibalizing fellow who has long served as the logo for Lehigh Valley-based Yocco’s Hot Dogs.

Meanwhile, I’ve got to give the proverbial head nod to the Trenton Thunder. So far as I can discern, they are the first club to include a charitable component along with their mascot Valentine’s Day delivery package. 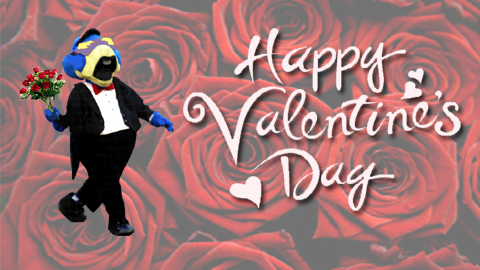 The $150 package includes a dozen roses, a night in a luxury suite, and “as an added “heartfelt” bonus, a 25 ticket donation will be made in your name to the Trenton Thunder Charities Tickets For Kids Program.”

And now we must move on the snow-covered field photo, an enduring staple of the Minor League Baseball offseason experience. These pictures of vast white expanse are meant to convey a sense of longing, for what has been and, yes, what will be.

The current kings of this subgenre are the Wisconsin Timber Rattlers, with announcer/media relations man Chris Mehring leading the charge. Last week, as Appleton WI was blanketed by snow, his Rattler Radio blog was updated by the hour with new snow-covered pics. Here’s a 4 p.m. specimen. 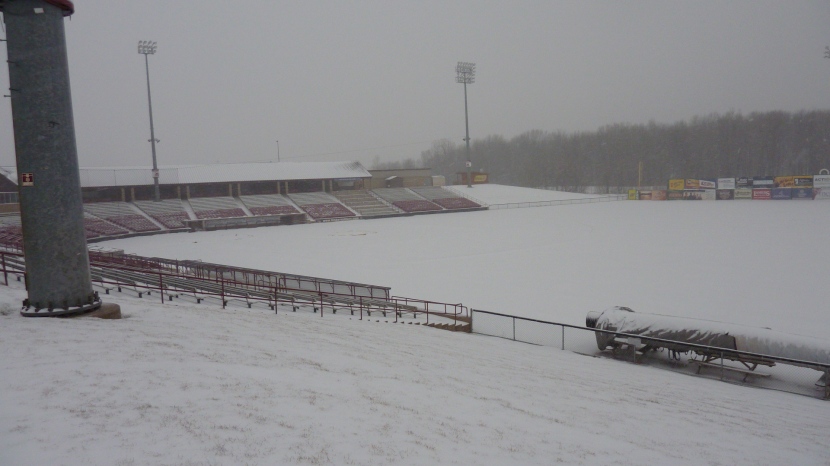 If there’s snow on the ground you can’t play ball, so alternate forms of recreation are needed. Fort Wayne TinCaps mascot Johnny overcame his feelings of cold-infused melancholy by dusting off the ol’ American Flyer. 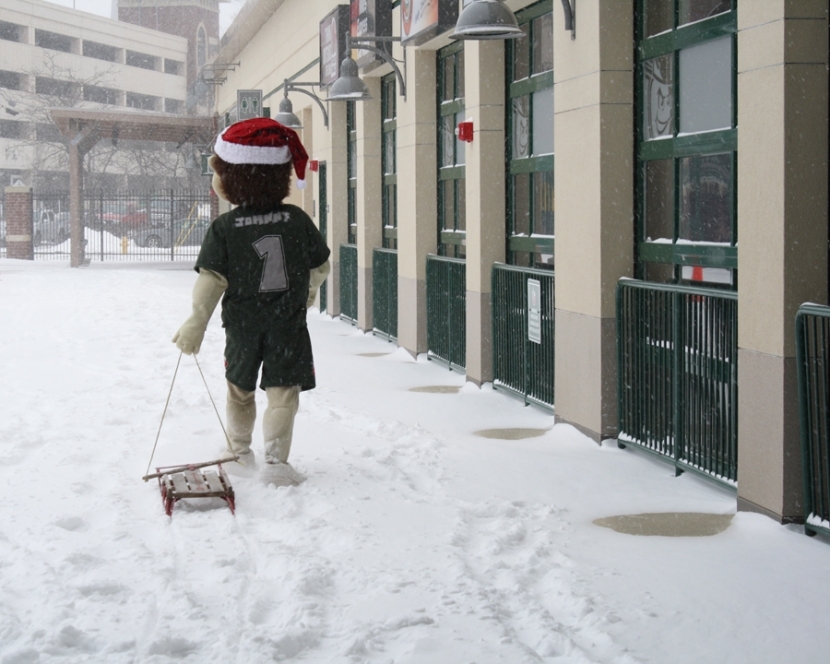 And speaking of melancholy, this is certainly the feeling pervading the city of Denver after the Broncos lost to the Patriots this past weekend. The loss also scuttled the JetHawks’ planned “Tebow Tuesday” promotion, detailed in Friday’s post. That’s a disappointing turn of events, to be sure, but at least it’s the first Tebow promotion to NOT result in a cease-and-desist letter. 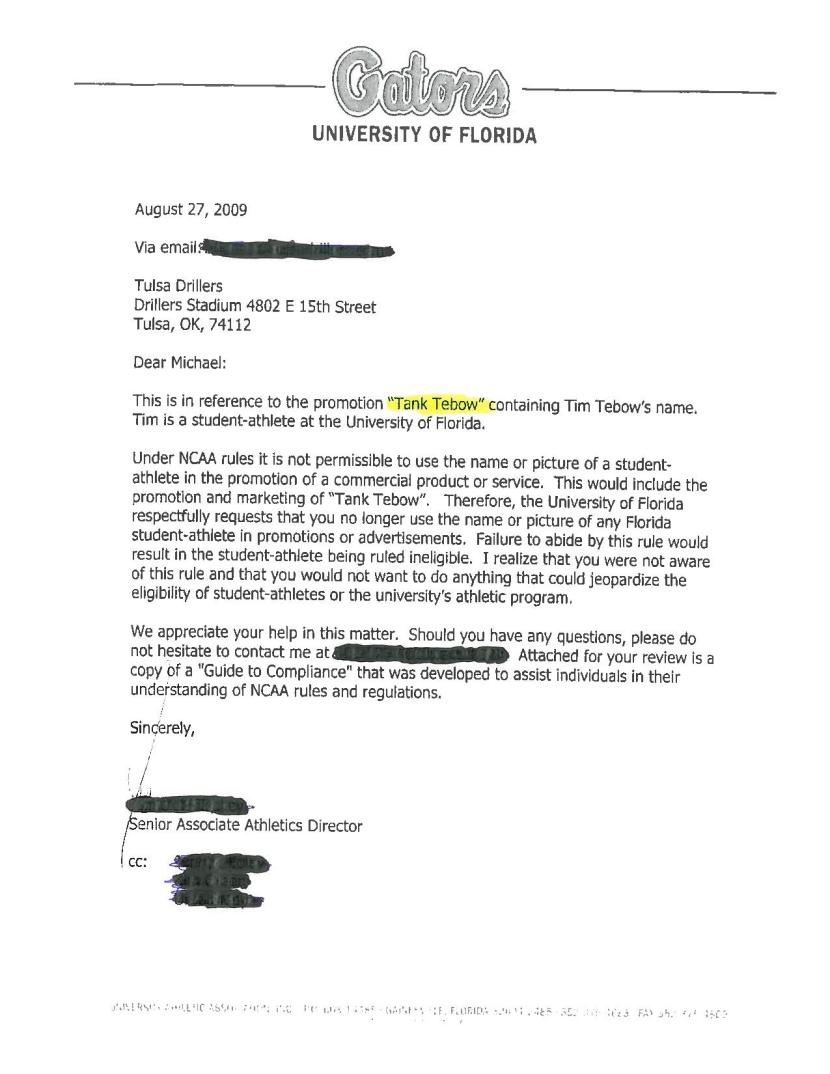 And that’s going to be it for today — stay tuned tomorrow for the eagerly anticipated (?) third installment of “A Quarter Century After the Cardboard.”

Got a lot on the docket today, starting with an intriguing ticket offer from the Timber Rattlers of Appleton, Wisconsin: The team is offering complimentary ducats to the 400 “displaced Super Bowl attendees” who bought tickets to the game but were unable to watch due to a seating snafu.

The “Super Second Chance” offer is really only applicable to 399 fans, as Timber Rattlers box office manager Ryan Moede was among the “displaced.”

Hopefully the aggrieved individuals in question take advantage of the offer, as it could be the first step toward overcoming the unimaginable trauma they were forced to endure.

But those lucky enough to actually have seats at sporting events now have incentive to tell the world. At least if said seats are located within Waterfront Park in Trenton.

The Trenton Thunder announced their “Tweet Your Seat” promotion yesterday, an initiative that comes equipped with its own URL (tweetyourseat.net). On game days, fans can “Tweet Their Seats” for a chance to win a gift card to the nearby Nassau Inn. Declares the organization:

Include your seat location, tag BOTH the Trenton Thunder and Nassau Inn in your tweet or status update and use the hashtag”#TweetYourSeat”.

We’ll pick one winner and deliver the gift card to their seat during the game! We’ll also post the winner’s name and/or twitter handle on this page….The contest opens at 10am on every game day and runs right up until the first pitch of the game.

This is the first time I’ve seen such a promo in the Minors, but I highly doubt it will be the last. It can easily be adapted to any market, and should help teams build social media followings for both themselves and the sponsor.

Moving from hi-tech to low, details regarding the 16th Annual Rickwood Classic were announced yesterday. The host Birmingham Barons will take on the Chattanooga Lookouts, with both teams wearing 1961-era uniforms. Hall of Famer Gaylord Perry will be the VIP Guest of Honor.

As you’ll no doubt recall, Rickwood Field is the oldest stadium in all of professional baseball. Last year, the Classic was named the top promotion in all of Minor League Baseball.

I’m not sure what the weather’s like in Alabama right now, but in Northwest Arkansas things have been unprecedentedly frigid. Check out Arvest Ballpark, home of the Naturals:

“No doubt about it,” writes Naturals marketing and public relations manager Frank Novak. “I think the people of Northwest Arkansas are ready for some baseball.”

Yesterday, the people of Earth were ready for love, and Minor League mascots across the land helped to deliver some. This picture shows Bernie of the Inland Empire 66ers with some new friends he made.

And, of course, the Crazy Hot Dog Vendor did his thing as well.Very disappointing to hear that Rodrigo the Ostrich didn’t fit in the car.

Derek Jeter’s more-contentious-than-expected contract negotiations have led some to wonder if the unthinkable could happen, with the iconic Bronx superstar signing with another team.

But what if Jeter really wanted to defy conventional wisdom? What if he decided to suit up for a Class A Short Season Astros affiliate? 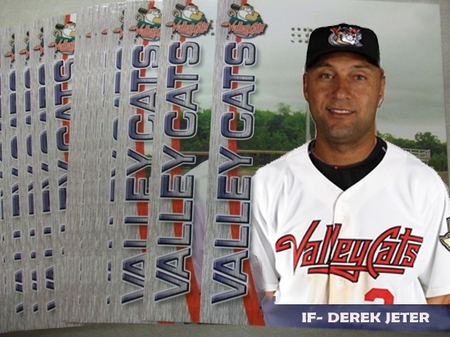 The above visual was created by the Tri-City ValleyCats, and inspired by a tongue-in-cheek article in the Albany Times Union.

A week after unveiling their new logos, the Altoona Curve have done a further bit of unveiling. This time, the uniforms: 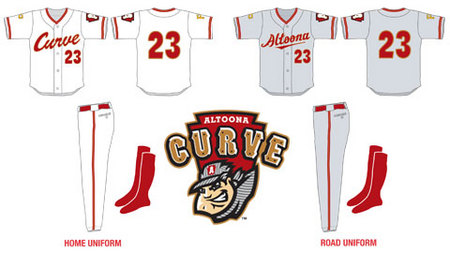 More info, and links to more uniform visuals, can be found HERE.

Meanwhile, I’d like to note that the Great Lakes Loons have produced the offseason’s first “snow-covered field” photo. Over the coming months, there is going to be PLENTY where this came from. 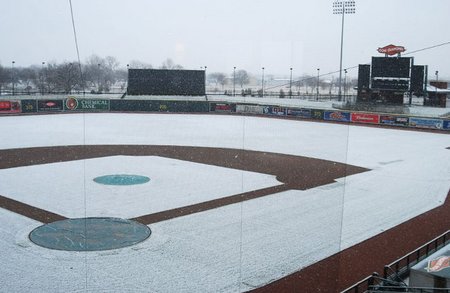 But if it’s plenty you want, it’s plenty I’ve got. Click HERE to listen to Gameops.com’s “Best of 2010” audio roundtable, with myself as one of the distinguished panelists. Joining me in discussion was sports entertainment guru Pat Walker and Minor League front office free agent Scott Carter (the Cliff Lee of this year’s crop).

And thanks to Gameops founder Jon Cudo, who put the whole thing together.

That’ll do it for me today, but I’ve got big plans for tonight: Ozzy at Madison Square Garden!