As of this exact moment in time, I am being on followed on Twitter by 1652 hardy souls (and  the occasional hardy spambot). I am grateful for each and every one of these individuals — especially the ones that possess sentience — but more are wanted and needed.

After all, I’m doing my best to document the best and brightest (not to mention the surrealest and strangest) that Minor League Baseball has to offer. This meticulous chronicling of a nationwide network of 160 distinct sporting entities is of interest to more than 1652 people. Of this I am sure.

Here’s one way to increase the ranks: give away Minor League memorabilia! As a result of my extensive travels (and more are coming soon!), I am awash in the stuff: 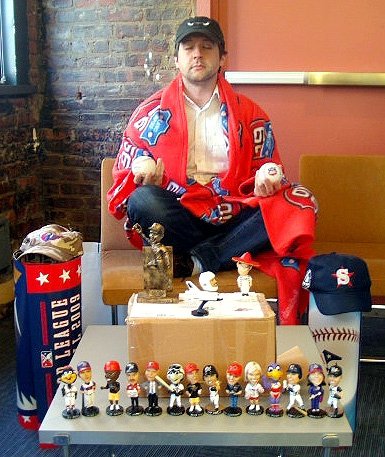 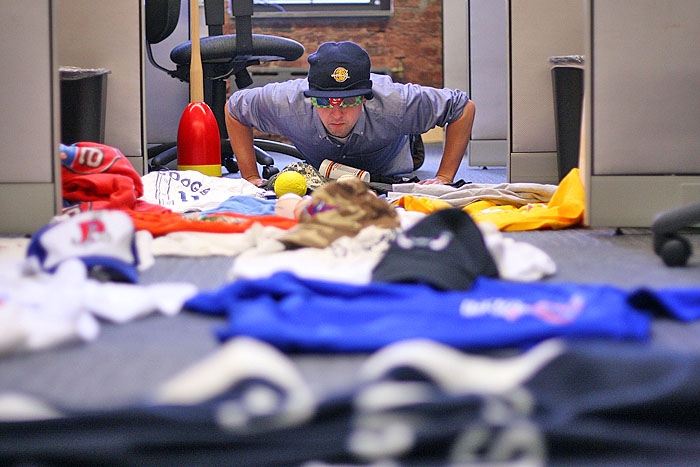 And now it’s time to give it away! Over the next month,@MinorLeagues (the official Twitter account of Minor League Baseball) and @BensBiz (yours truly) will be distributing this accumulated souvenir bounty to our loyal followers. It will start next Friday (March 16th), and run each Friday thereafter. Here’s how it will work.

2. Look for the following tweet, which will be posted each day of the contest at 2 p.m. ET: “It’s MiLB giveaway time! Must be following @MinorLeagues and @BensBiz to win! Click here for official rules.”

3. This tweet will be followed by another tweet, posing a question along the lines of the following: “What is your favorite Minor League logo and why? Respond to @BensBiz and @MinorLeagues to be eligible to win a prize.”

4. Those who respond to the question posed in the tweet (and are following both accounts) will be then entered into a drawing to win that day’s prize. As to what that could be — well, who knows? An Inland Empire 66ers Snuggie? An Iowa Cubs t-shirt? A Charleston RiverDogs knit cap? These are the sort of things that most people only dream of owning, and we are here to make your dreams come true. 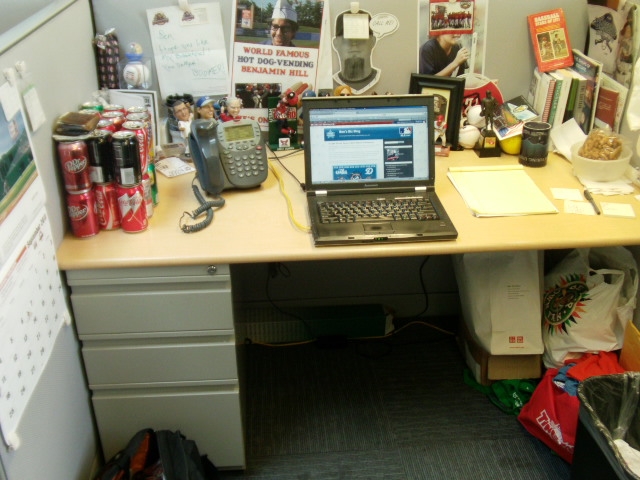 Under the desk: bags and bags of MiLB swag

So that’s the gist of it — a simple way to systematically distribute Minor League swag across the land, while gaining followers at the same time. What’s not to like?

And, teams — going forward @BenzBiz and @MinorLeagues would be delighted to promote your unique giveaway  items and merchandise. Simply send a sample to MiLB.com HQ (address provided upon request). I’ll take pictures of it (maybe even make it my Twitter avatar pic for a few days), and then we’ll give it away in an manner similar to the one outlined above.

And while all of this is going on, I’ll be busy plotting my 2012 Minor League road trips. Rest assured that these travels will quickly replenish my MiLB souvenir supply, so that the entire process can begin again.