Last week’s “Promotion Preview” column included the following, which I have edited somewhat in order to avoid seeing my bad jokes for a second time:

Wisconsin Timber Rattlers (Midwest League)
Salute to Cows, June 4
Wisconsinites are serious about their docile domesticated land mammals, as evidenced by the extravaganza that is Thursday’s “Salute To Cows.” The night’s on-field contests promise to be exceptionally entertaining, as fans will vie to see who is the best milk chugger, beef eater and moo-er (these sort of things demand to be documented for posterity).
Contest winners receive a year’s supply of cheese curds, which in Wisconsin are worth their weight in gold. A costumed cow is scheduled to throw out the first pitch, and all player head shots on the videoboard will feature milk mustaches. In short, this will be “udderly” amazing.

Due to the inexorable passage of time, June 4 has came and went. Fortunately for all involved, the events of that evening have been well-documented by Timber Rattlers announcer and blogger extraordinaire Chris Mehring. What follows is a photo-heavy look at the brilliance that was the Timber Rattlers’ “Salute to Cows.”

One of the premier between-inning events that night was the Milk Chug. I like to call this picture “Goldilocks, the Three Bros, and a Costumed Snake” (I’m not sure who won, but I definitely would have rooted for the guy who took the time to put on a bib).

The next three pictures are described by Mehring as follows:

1. A contestant is blindfolded by our mascot Fang and ready to tip a cow.
2. The cow awaits tipping.
3. The cow is tipped.

But what I don’t get, Chris, is why the cow isn’t tipped over in the third picture. It looks to me like the tables were turned, and the “tipper” became the “tippee.” Observe: 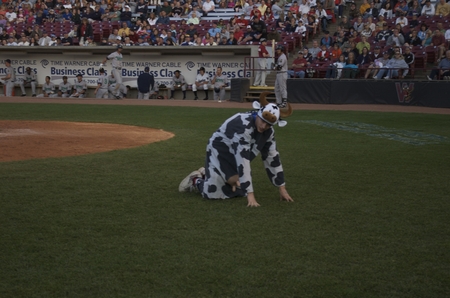 I will close with what may be my favorite photo thus far this season. I’ll let Mehring set the scene:

“When there’s a year’s supply of cheese curds on the line, one must moooooo from one’s soul. And the gentleman on the left is about to mooooooo like he’s never moooooooed before.”

Thanks again to Chris Mehring and the Timber Rattlers.

And — hey you! — do me a favor and get in touch. Be you fan, front office member, or (best case scenario) moneyed media mogul captivated by my mastery of a niche subject, I want to hear from you.

Apologies for being so back-logged on the blog, as well. Thanks to those who have sent me stuff, and are patiently waiting for it to appear on this hallowed sliver of the blogosphere.

In the meantime, read the latest “Promotion Preview.”

As you may or may not be aware, the inexorable passage of time has resulted in the fact that we are now living within the realm of a new calendar year: 2009!

I, once again, find myself either unable or unwilling to make an earnest bid for literary immortality. But I have to do something to pass the time and pay the bills, so I may as well engage in a task that serves the betterment of mankind. Therefore, I am pleased to announce that I have updated my links section. There have been a few additions and many subtractions, as I work toward the ultimate goal of providing the most well-curated Minor League link list ever known to man.

I must credit Joey over at “The Consumption Of…” blog for motivating me to undertake this most recent round of link list updates. For it was he who asked me, in the comments section of a recent post, what were some of my Minor League team blogs.

anything related to the BlueClaws.

The Brooklyn Baseball Blog — All sorts of inside tidbits on life in the Cycones front office, written in a light-hearted and humorous style.

Rattler Radio (Wisconsin Timber Rattlers) — As someone who has engaged in my own half-insane blogging adventures, I greatly enjoy announcer Chris Mehring’s wide-ranging, highly-detailed, and humor-laced posts.

Travelerocity (Arkansas Travelers fan blog) — No other Minor League blog I’ve come across enjoys a greater level of user interaction than does “Travelerocity.”

Of course, please get in touch (by email or the comments section) with YOUR favorite blogs. If I’m missing anything, please let me know. And, as always, thanks for reading.

On Saturday, August 16, a Mascot Showdown for the ages took place at Fresno’s Chukchansi Park, as the Grizzlies’ own Parker went head-to-head with the legendary Phillie Phanatic in a battle for costumed character supremacy.

In anticipation of this momentous event, I wrote a preview detailing what fans could expect from the evening. Now, it is time for the review.

Bradley Collins, the Grizzlies Director of Mascot Relations and Parker’s best friend, was kind enough to provide me with a recap of what took place. All photos contained therein are courtesy of Don Davis, whose work can be viewed at dadphoto.com.

“We started off pre-game by doing solo introductions, first
Parker, then the Phanatic. The rest of pre-game was a great mix of improv,
messing with umpires, shining Andruw Jones’ head and the highlight may have
been when we did an ATV stare down near the centerfield gate (Parker and
Phanatic drove at each other full speed narrowly missing each
other).
The Phanatic did some classic schtick during the Mid 3
break followed by a Squirt Gun duel in End 3. Parker and the Phanatic started
off back to back, took 5 paces and then proceeded to squirt our on-field MC and
everyone near the dugout.”

“In End 7, the final showdown of the evening, each mascot
had to cross the Balance Beam of Greatness to be awarded the title “Best Mascot
in Baseball”.  While Olympic fanfare played over the speakers, the Phanatic
slowly but surely crossed the Balance Beam of Greatness.  Then it was Parker’s
turn. Dressed in his tutu, Parker managed to make it half-way across the Balance
Beam of Greatness and was then distracted by the Phanatic, who flashed him. This caused Parker to fall and hit his groin on the Balance Beam, signaling the
crowd to sound out “OOOOhhhhhhhhhhhhhh”.
The Phanatic was given the award Best Mascot in Baseball,
followed promptly by a round of boos from the hometown fans, so the
Phanatic graciously gave the award to Parker to cease the booing.  So
technically the Phanatic retained the title, but Parker gave him a legitimate
run for his money.”

So there you have it, folks. The Phanatic remains the best mascot in all of baseball. BUT FOR HOW LONG? Parker is down, but certainly not out…