I’ve learned never to say never in this crazy game called life, but I can say with a strong degree of certainty that THIS will be the last new logo unveiled this offseason:

Yes, the Tucson Padres now have an identity. It is indebted to the San Diego Padres duds of yore (1978-84, specifically), and also incorporates Tucsonian elements via the mountains and cacti. In a 2010 first (save for the Kannapolis Intimidators alternate mark), the logo was NOT designed by either Plan B Branding or Studio Simon. Rather, it was the work of the San Diego Padres Creative Services Department. 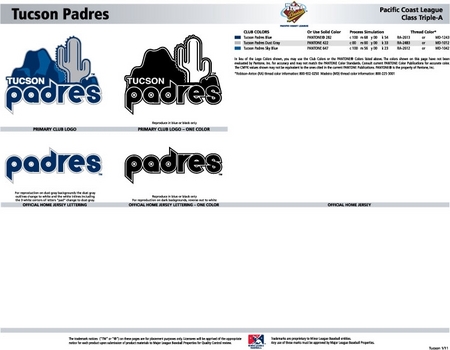 T-Pads merch won’t be available for several more weeks, due to the fact that the logo just received official approval. For more on the logo and recent Tucson developments, click HERE. For some background on why a Pacific Coast League is back in Tucson in the first place, click HERE.

In a nutshell, the team will play in Tucson for at least two seasons after moving from Portland. The plan is to then move to Escondido, CA. Stay tuned.

And since I’m on the topic of logos, surely one of the most memorable marks to have been unveiled this offseason is the Asheville Tourists’ “Mr. Moon”.

Well, now Mr. Moon needs a name.The Tourists want suggestions, with entries judged based on creativity, regional relevance and family-friendliness. The first thing that comes to my mind is “Keith”, and your response to that should be “Who?”

Ah, nevermind. I’m out of here.