I’m not really sure what constitutes a typical week these days, but regardless of the criteria this week was anything but typical. On Sunday afternoon, I embarked on a trip to Lowell, MA with Zack Hample, his girlfriend Robin and his friend Andrew. This jaunt was motivated by Zack’s world record attempt the next morning — his goal was to catch a ball dropped from a helicopter at a height of 1000 feet. 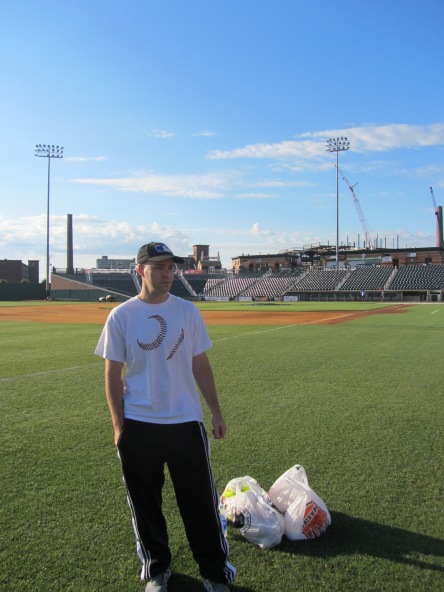 From left to right: Zack Hample, plastic bags of baseballs

I wrote 1800-some words on all of this over at MiLB.com, so if there is anything that you find lacking in this particular narrative then please, by all means, read the story. This blog post is supplementary content, and I do not wish to be redundant. But here’s the gist of it: Zack is the world’s greatest “ballhawk” (having “snagged” over 6000 baseballs at 50 Major League stadiums) and as such is a niche celebrity. He seems to attract fans and detractors in equal measure — the former are in awe of his unparalleled skill within his chosen area of expertise, the latter often characterize him as an obnoxious manchild in the throes of a seemingly endless adolescence.

I’m neither fan nor detractor. As I explain in the story:

I first met Zack in 2003, after answering his Craigslist ad in search of individuals to hit fungoes with in Central Park (strange but true). We were briefly co-workers at MiLB.com in the site’s inaugural 2005 season, and, in fact, it was Zack who first alerted me to a job opening there. So, in writing about this stunt, I am not an impartial member of the media. I am a friend of Zack’s, and in that capacity, played a small role in helping this stunt get put together.

This past offseason, Zack asked me for recommendations regarding which teams might be interested in hosting his record attempt, and the Lowell Spinners were the first that came to mind.

The night before, I stopped in Zack’s hotel room in order to rub some balls (go ahead, make some jokes, it’s all too easy). The folks at Lena Blackburne’s Rubbing Mud had donated a jar of their signature product, which is the same mud rubbed on all Major League Baseballs before they are put into play.

I even rubbed up a few myself:

The next morning started bright and early, as the stunt was scheduled for 7:30 in order to take advantage of optimal wind speeds.  We entered through a LeLacheur Park side entrance, just as the helicopter was landing on the field:

The first order of business was a safety and logistical briefing from stunt coordinator (and aviation professional) Mike Davison. He’s the guy in the dark blue shirt, very serious about his responsibilities. 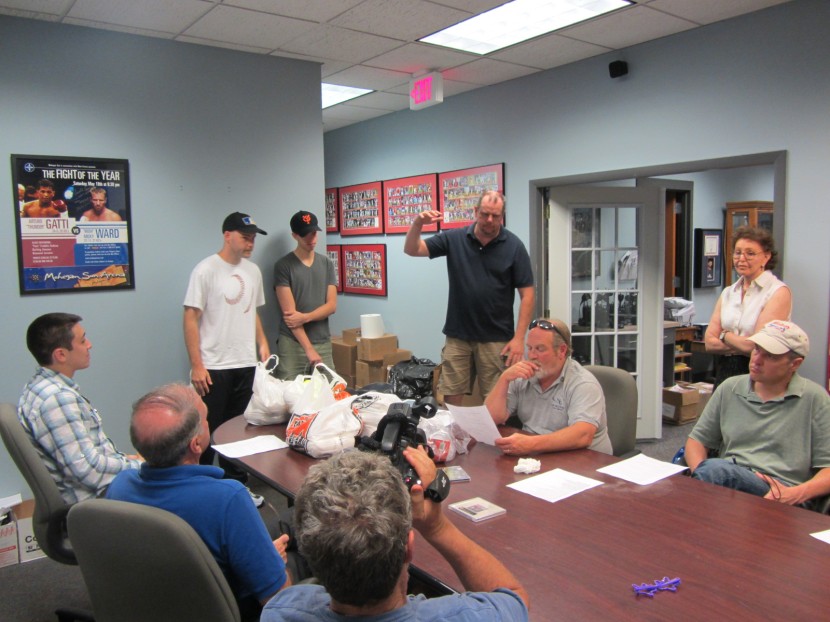 After the briefing, the spectators (comprised of friends, family, Spinners interns and staff and local media) retreated to the dugout. 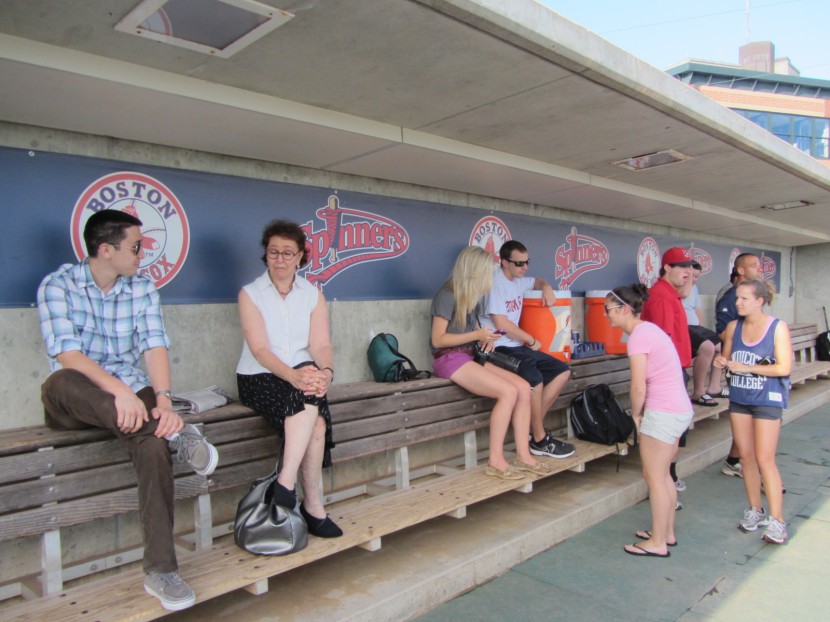 Zack, meanwhile, suited up in catcher’s gear donated by Rawlings. In this shot, his mother, Naomi, looks on with concern. 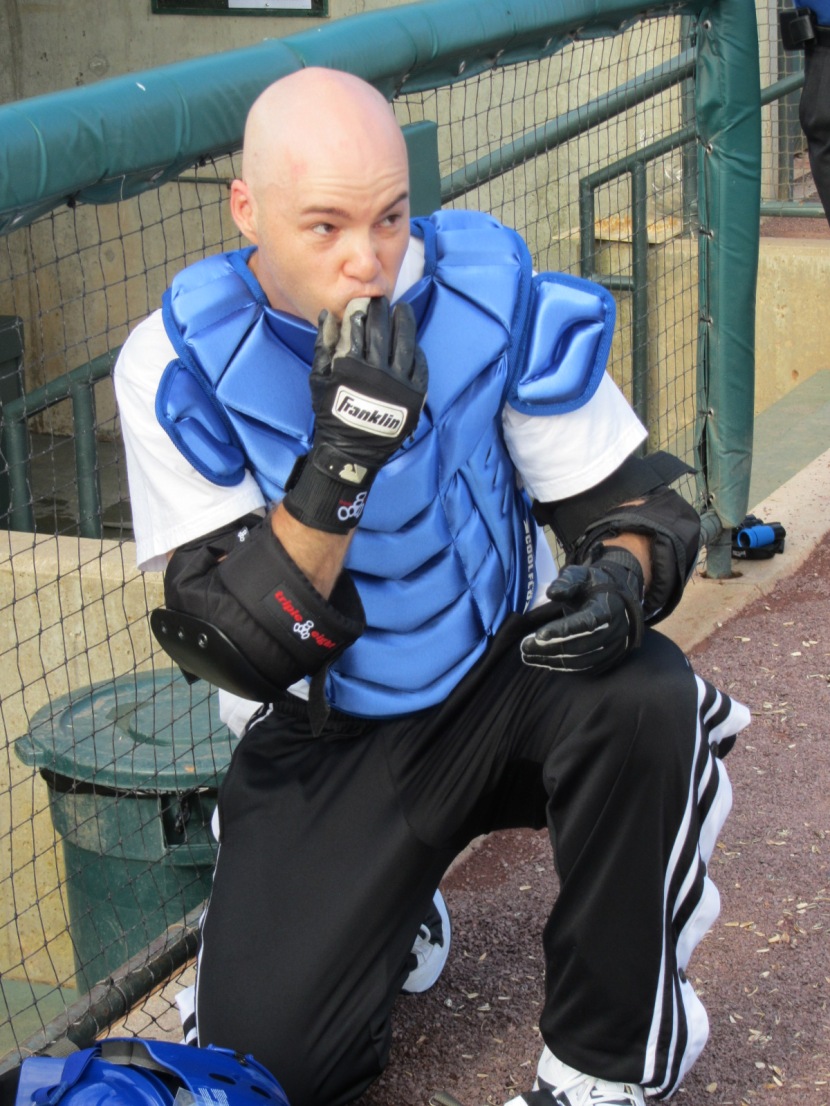 Into the great wide open…

The first drop was from 300 feet, with a softball (in order to set the softball drop world record, of course). The heights then increased incrementally throughout the morning, to 550 to 750 to, finally, 1000. At first visibility was a problem, but all involved soon settled into a groove. 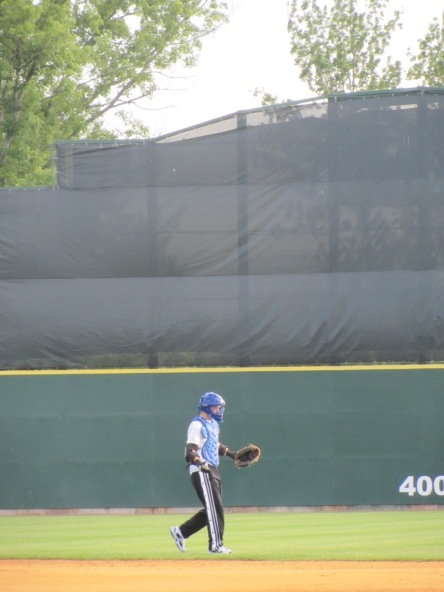 Spinners groundskeeper Jeff Paolino was not a happy camper, as each missed ball created a new divot in his beloved ball field.

I got lucky with this shot –a ball dropped from an official height of 762 feet, just before it landed in Zack’s glove. This turned out to be the highwater mark of the morning.

Zack didn’t get many opportunities from 1000 feet, as the stunt was called off due to increasing winds. This was the closest he came: 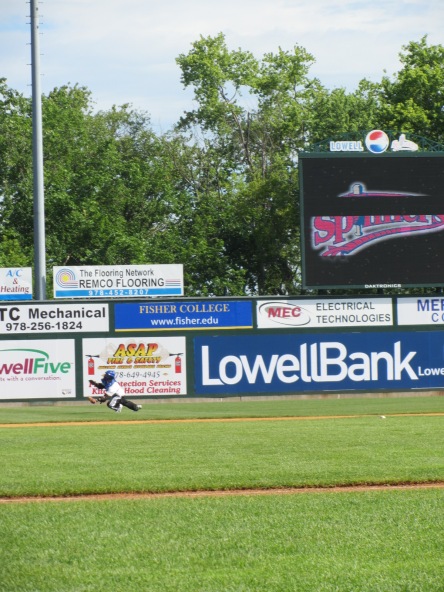 In the past, similar world record attempts resulted in a litany of injuries: smashed teeth, broken limbs, etc. All Zack ended up with was a bruised middle finger. And in this shot, the bruise hadn’t even appeared it. All things considered, that’s a pretty clean escape.

Zack, just after the stunt, recounting just how close he’d come to a 1000 foot catch.

But soon enough Zack had to yield the floor to Spinners clubhouse manager (and New England baseball icon) “The Dog Man.” Once the Dog Man gets on a roll, there’s no stopping him.

I’ll have plenty more from the Dog Man — and the Spinners in general — next week. But, for now, that’s gonna do it. For far more context on the world record attempt click HERE. Otherwise, I’ll catch you on the flip side.

One of 2011’s most intriguing promotions is planned for TONIGHT — the so-called “Human Home Run” in Lowell, MA. Between games of the doubleheader, human cannonball David Smith, Sr. will be shot out of a cannon behind second base and land over the wall in right field.

This stunt is taking place just one week after a similarly unique (yet completely different) initiative. On June 29, 3014 fans engaged in simultaneous dental flossing, a quixotic endeavor on par with last year’s “Salute to Bubble Wrap.”

While using one long piece of floss would have been hilarious, the Spinners went a far more hygienic route by distributing Glide floss picks. In the middle of the fourth inning, it was synchronized flossin’ time. 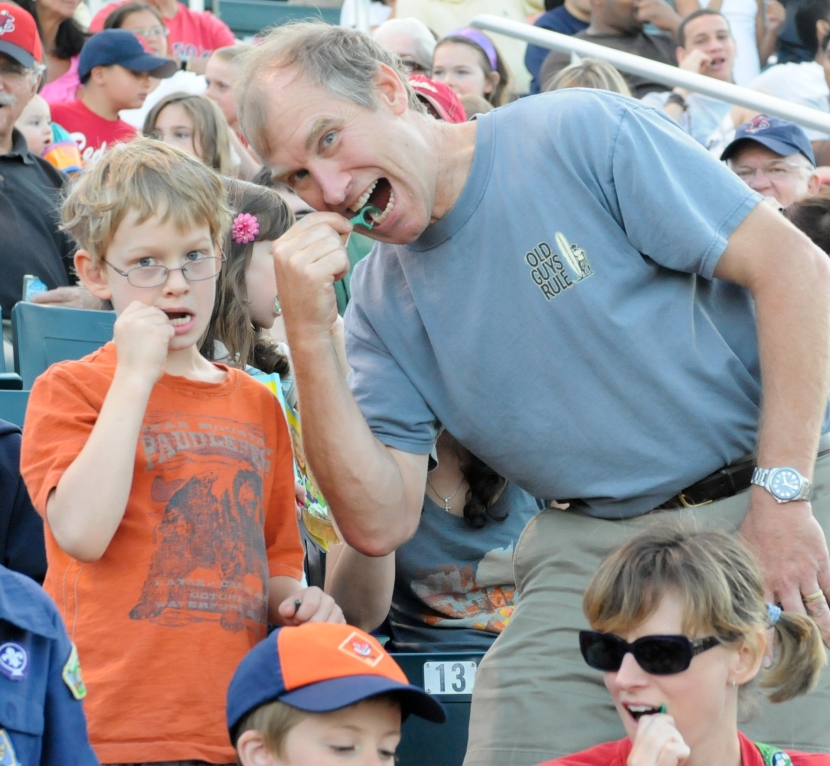 The players, upstanding role models that they are, got in the act as well.

Flossing would be an especially apropos activity after witnessing the Memphis Redbirds’ new between-inning competition: The Rendezvous Rib Race.

On a more personal level, may I suggest that you Rendezvous with MiLB.com? In addition to a jam-packed new “Promo Preview” column, today marked the appearance of  the latest “Crooked Numbers.”

This column is a labor of love (my attempt to be the Jayson Stark of Minor League Baseball, basically), and I’d greatly appreciate if those who enjoy it pass it along to like-minded friends. I’ll close with my favorite nugget of info from this month’s column, an item brought to my attention by uber-alert Lancaster JetHawks broadcaster Jeff Lasky:

The more things change…: The Lancaster JetHawks suffered through their worst inning in franchise history June 29, allowing visiting High Desert to plate 13 runs in the second. This nightmarish frame broke the old franchise record of 12 runs allowed in an inning, which had been achieved by Lake Elsinore on May 20, 2007. Lake Elsinore’s Yordany Ramirez hit for the cycle in that ballgame, completing the feat with a triple in the record-setting 12-run eighth inning. Amazingly, Ramirez also appeared in the June 29 ballgame — as a member of the JetHawks’ pitching staff! Ramirez, in his first full season as a pitcher after nine as an outfielder, tossed two scoreless innings long after the damage had been done.

This kind of stuff is catnip for baseball nerds, right? I sure hope so.

The last couple of weeks were slower than a sloth on a treadmill, but boy oh boy have times changed.

All of a sudden it feels like the season again, with news and notes coming in from left and right and everywhere in between. It’s time to start posting, because the content levels are rising and soon I might drown — alone and forgotten in a remote corner of MiLB.com HQ.

To the Bullet Points!

— The New York-Penn League may not start play for another three months, but that didn’t stop the Brooklyn Cyclones from releasing a picture of their Angel Pagan bobblehead. I’m glad that they took his first name literally as opposed to the surname, because a bobblehead depicting the ballplayer as a hedonistic polytheist probably wouldn’t go over too well.

— Meanwhile, Brooklyn’s NYPL rivals the Lowell Spinners announced the follow-up to last year’s celebration of Bubblewrap.The team will stage a “Flossing World Record Attempt” on June 29, a promotion recommended by four out of five dentists. My extensive research into this most crucial of topics revealed that previous attempts have involved a huge single strand of custom-made floss.

I’m not sure if this will be the case in Lowell, but either way I recommend that this product serve as the official sponsor.

— In other follow-up news, the Lake County Captains are continuing with the Christmas Story themed giveaways that started with last season’s “Skipper Leg Lamp.” On July 23, fans will receive a bobble doll in which Skipper’s nose is stuck to a foul pole. I haven’t obtained a picture yet, but this item is of course a reference to this: 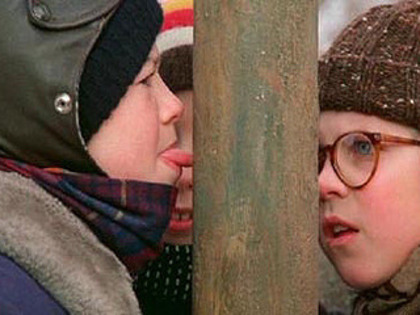 — Another club to recently unveil their 2011 promo scheduleare the newly-rechristened Omaha Storm Chasers. While other teams honor Jimmy Buffet, the Storm Chasers instead pay homage to Warren. The Omaha billionaire and member of the team’s ownership group gets his own road jersey replica giveaway, taking place April 30. Here’s a pic of this Warren piece of memorabilia:

— Another notable jersey hailing from the preeminent Midwest is that which the Wisconsin Timber Rattlers will be wearing during Sunday home games. This one is like an undersized fish — total throwback.

— In keeping with the jerseys theme, the Charleston RiverDogs will be giving away Roberto Alomar Charleston Rainbow jerseys on July 23. The newly-minted Hall of Famer suited up for the Rainbows in his first professional season, and while I have yet to obtain photographic evidence here’s my best approximation of what it will look like:

But no matter what it looks like, this is sure to be one of the best ROYGBIV-aways of the year!If there’s a support group for those with an over-reliance on puns and wordplay in general, then I should probably join it. I’m not even joking, it’s become an obsession and I don’t think it’s healthy.