Without a doubt, the most well-known and beloved food delicacy that Binghamton has to offer is the “spiedie” — tender meat cubes that are marinated for days in a special sauce and then grilled. Even writing about them makes me hungry.

Naturally, the Binghamton Mets serve this regional specialty at their concession stands, but they’ve taken things a step further than that. Introducing the Spiedie Mascot Race: 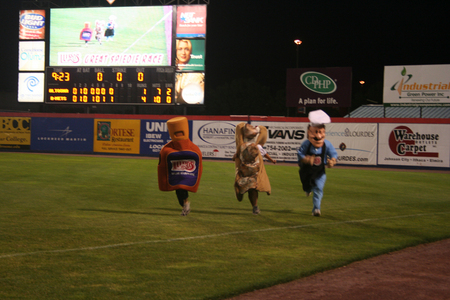 “The race is sponsored by a local company that produces the marinade and features
a giant spiedie sandwich, a marinade bottle, and a chef character who is part of
the company’s logo. This year Marinade has yet to win a race, much to the
chagrin of many of our fans. It’s by far our most popular on-field promo with
the fans, players, and even the umpires. Last homestand the ump crew wanted to
intervene to help the Marinade win his first race. A few weeks ago a
Connecticut relief pitcher ran as Sandwich.“

Additionally, the B-Mets have become adept at incorporating stand-alone theme night promotions into the nightly race. As the following photos illustrate, a veritable who’s who of pop-culture powerhouses have joined in on the action.

Not even the Wicked Witch or the Cowardly Lion can contain Sandwich: 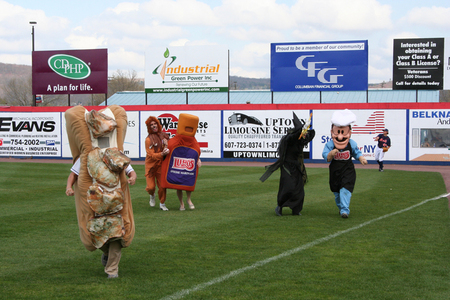 Here, the racing triumvirate rallies around Indiana Jones, a bullwhip, and a boulder: 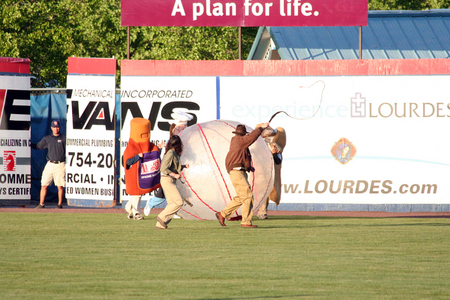 Clearly, Iron Man was hostile to the entire idea of a mascot race: 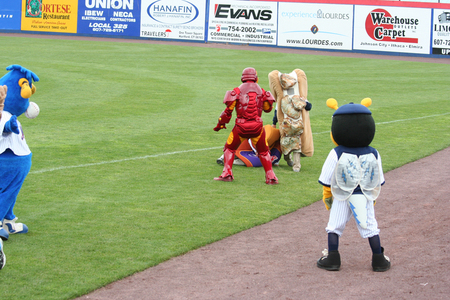 If anyone wants to provide me with a caption for this somewhat unsettling photo, I’d greatly appreciate it:

Finally, I have to point out that this is not the first time that Spiedies have been mentioned on this fine blog. Long-time readers will recall this post, in which Tri-City ValleyCats assistant GM Vic Christopher talked about one of his club’s popular new additions:

As always, please get in touch should you have info on mascot races, regional delicacies, or anything at all.