As mentioned in the previous post, the Burlington Royals have a concession stand. All teams do. 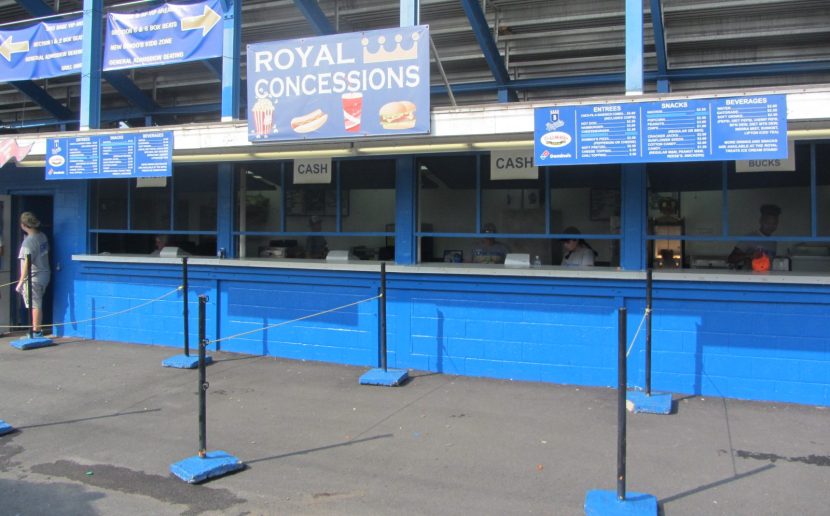 But the B-Royals concession scene is not limited to the above area. There is also a tent. This tent is called “Grill 1986,” a reference to the team’s first season of Appy League existence. The grill itself probably hasn’t been around since 1986. Most grills don’t live that long.

At Grill 1986 I made the acquaintance of one Justin Moody. 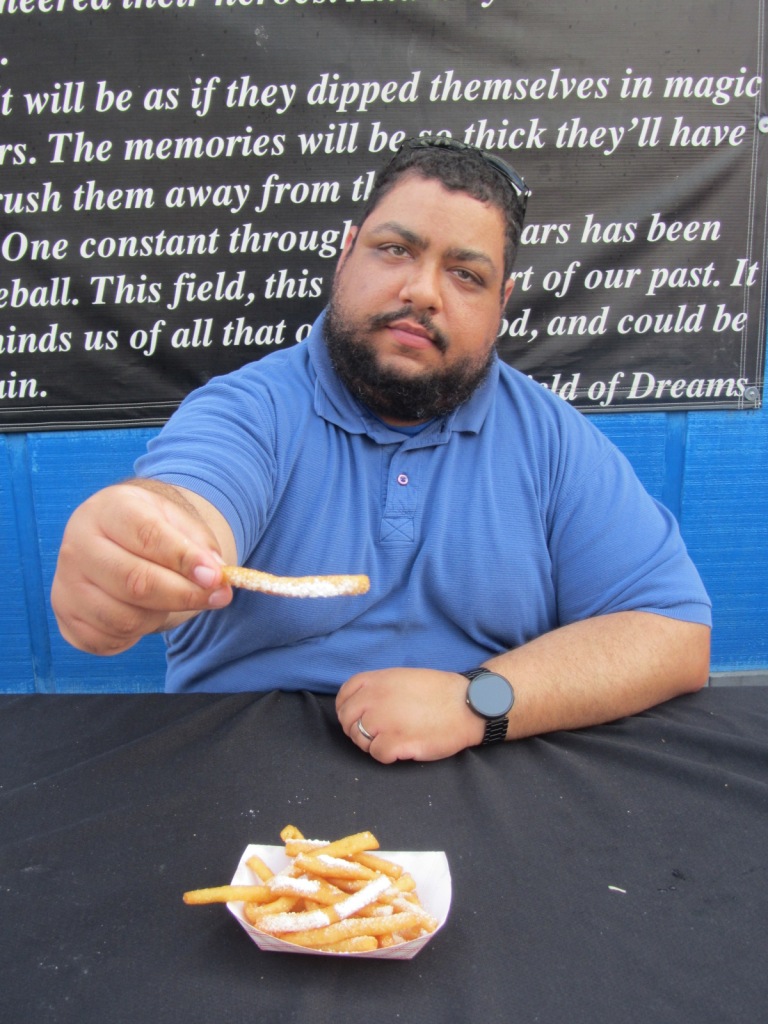 Justin was, of course, my designated eater (the individual who consumes the ballpark cuisine that my gluten-free diet prohibits). He works in Chapel Hill, North Carolina as a paralegeal, but grew up in southwestern Pennsylvania and is, as such, a huge Pirates fan. The first Minor League game he remembers attending was the Greenville, South Carolina-based Capital City Bombers (in 1992 or thereabouts), and he has since visited every park in the Carolinas. Justin’s a regular reader of this blog and said that he “thought it would be fun to join in on your journey, and lend my stomach to you.”

We began with the “Moose Taco”, an item that came into being because the girlfriend of B-Royals’ general manager Ryan Keur thought that was actually the name of Kansas City Royals third baseman Mike Moustakas.

The “Moose Taco”, truth be told, is more like a “Moose Burrito.” 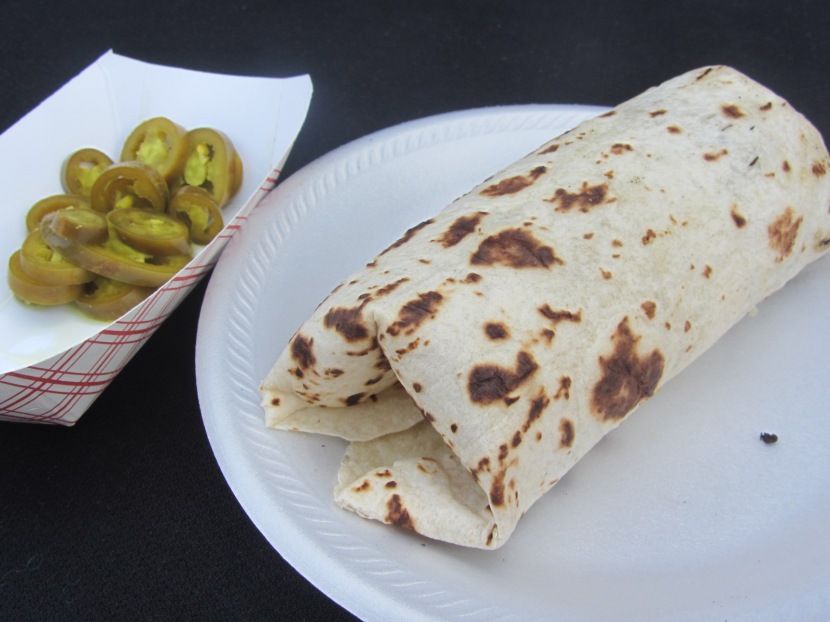 Have at it, Justin.

Mikey Morrison, the B-Royals food and beverage overseer, told us that the contents of the Moose Taco “depends on the day.”

“Today it’s beef with cheese and jalapenos on the side,” he said. “Originally we would spell [the Moose Taco] like his name [Moustakas], but we made it the Moose Taco so that people would know what it is.”

“The pickled jalapenos give a nice little spice to it,” said Justin. “The meat has got a good smoky sear to it. I think it’s a burger patty that’s been cut up, but it’s really good. It eats pretty easily, the only thing in it is meat and cheese. You don’t get slowed down by lettuce or sour cream or whatever.”

Next up was Funnel Fries, marking the second time in as many days that one of my designated eaters consumed them (see also: Yankees, Pulaski).

Justin cleared his mind and opened his mouth.

“[The funnel fries] came out nice and warm. Not too oily or greasy, which I really appreciate,” he said. “They’re good and crunchy, with just enough powdered sugar. Sweet, without trying to create a new cavity. Pretty darn good.”

Justin, if you’ve noticed, is pretty darn good at articulating his food thoughts.

The food was washed down with a Red Oak beer, brewed in nearby Whitsett, North Carolina. Morrison explained that the team began offering it at the ballpark in 2015 and that it “quickly became a best seller.”

Justin described it as a “good red or brown ale…crisp and refreshing on a hot day. It’s got a good malt flavor to it. It’s one of my favorites, actually.”

Another local favorite on offer at the ballpark are cupcakes courtesy of Burlington’s Main Street Cake Shoppe.

Justin’s wife, Meghan, was also at the ballgame. For most of my time with Justin, she elected to remain in her seat and keep score (not a bad decision at all). But Justin recruited her to come to our grill-side location to help him consume the cupcake. 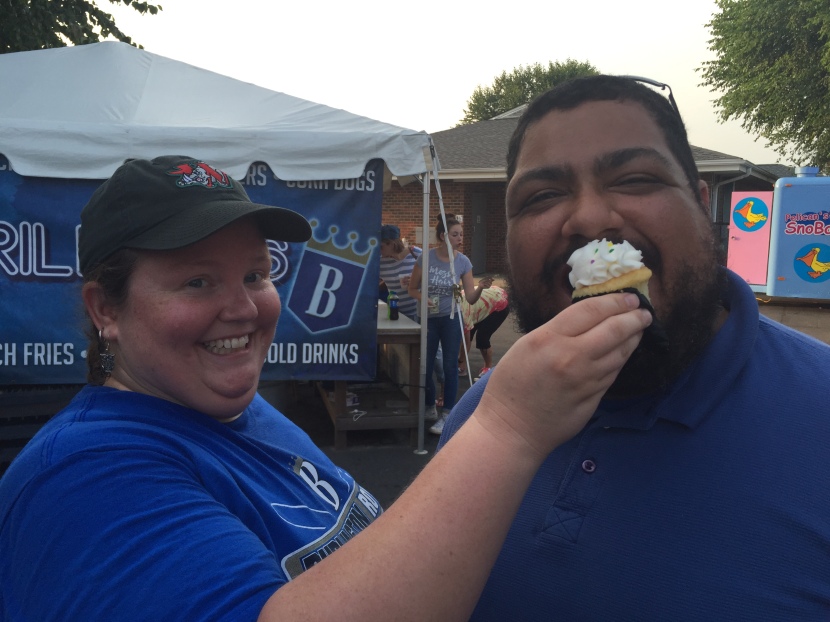 Perhaps inevitably, Justin ended up getting his just desserts.

“It’s nice and soft,” said Justin. “I’d say it’s pretty much the perfect cupcake, though a lot of it ended up on my face.”

Despite suffering this dessert-based indignity, Justin had nothing but good things to say about his designated eating experience.

“There’s nothing wild or outrageous,” he said, of the Burlington concession scene. “Just really good basic ballpark food, and I appreciate that they’re supporting local businesses.”